Ongoing massacre: 5 killed and 43 injured in Chicago over weekend 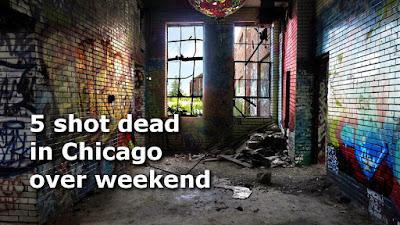 DAILYKENN.com --Black lives don't seem to matter when they kill each other in black communities.


Five people were fatally shot in Chicago over the weekend of August 9-11, 2019. Another 43 were wounded by gunfire. Among those shot was an 8-year-old girl. A 16-year-old boy as killed.

Some describe the never-ending massacre of black-on-black violence as a "self-cleaning oven."

Some attribute the violence to gangs, drugs, degradation of families, welfare, etc. Others point to a pathalogical cause; a genetic propensity to low impulse control and violence.

Weekend gun violence in Chicago left five people dead and at least 43 others wounded, including an 8-year-old girl who was shot Sunday at a barbecue in Humboldt Park.

The girl was playing in the 1000 block of North Monticello Avenue about 3:55 p.m., when someone inside a blue Dodge Charger drove by and opened fire, Chicago police said. She was rushed to Lurie Children’s Hospital and was in good condition.

On Saturday, a 16-year-old boy was shot to death in Little Village on the Southwest Side.

William Granados was in the front seat of a vehicle about 1:53 a.m. in the 3400 block of West 24th Street when someone opened fire from the sidewalk, police and the Cook County medical examiner’s office said.

Granados was struck in the head and taken to Mount Sinai Hospital where he was pronounced dead, authorities said. An autopsy ruled Grandados’ death a homicide, saying he died of a gunshot wound to the head.

Minutes later, a 19-year-old man was killed in Garfield Park.

Geniko Childress was standing with a group of people about 1:55 a.m. in the 600 block of North Sawyer Avenue when shots rang out, police and the medical examiner’s office said. He was struck in the armpit, and he was pronounced dead at Mount Sinai Hospital.

Less than half an hour before that shooting, a 29-year-old man was fatally wounded in South Chicago.

Malcolm Sabbs was standing on the sidewalk about 1:35 a.m. in the 8600 block of South Exchange Avenue when a group of males approached him on foot and unleashed gunfire, police and the medical examiner’s office said.

Sabbs was struck in the head and taken to the University of Chicago Medical Center in critical condition, authorities said. He was pronounced dead about 14 hours later.

The medical examiner’s office ruled his death a homicide, with an autopsy saying Sabbs died of multiple gunshot wounds.

Later that day, a 47-year-old man was killed in a shooting in Humboldt Park.

Douglas Tate was sitting in a vehicle at 6:17 p.m. in the 3300 block of West Chicago Avenue when someone walked up and opened fire, striking him in the arm and armpit, police and the medical examiner’s office said.

He was rushed to Mount Sinai Hospital, where he was later pronounced dead, authorities said. He lived on the Northwest Side.

About 8:45 p.m., a man was killed in a double shooting in Bronzeville.

Terrell Hudson was with another man about 8:44 p.m. in 500 block of East 40th Street when a vehicle approached them and someone fired shots, authorities said.

Both men were struck multiple times and took themselves to hospitals for treatment, police said. Hudson, who lived in suburban Palos Hills, was pronounced dead the next morning at the University of Chicago Medical Center. An autopsy released Monday ruled his death a homicide.

On Sunday, six people, including five women, were wounded in a drive-by in Garfield Park on the West Side.