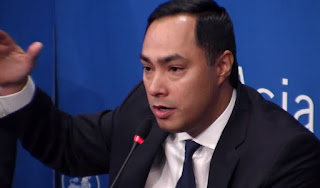 DAILYKENN.com --Countless numbers of patriots are facing harassment and worse after Rep. Jacquin Castro (D-Texas) outed them as Trump supporters. To our knowledge, no legal action has been taken against Castro.

Andrew Anglin, on the other hand, was dinged for $14-million after reportedly encouraging readers to protest the actions of one Montana businesswoman who allegedly harassed the mother of activist Richard Spencer. Anglin publishes dailystormer.name website.

Rep. Joaquin Castro’s stunt targeting Trump donors has been downplayed by the left but the repercussions are already being felt by the Texas constituents he exposed.

A woman on the Democrat’s list of San Antonio residents who have donated to President Donald Trump’s campaign revealed that she has been on the receiving end of a threatening, hate-filled voicemail.

A judge on Thursday ordered the publisher of a neo-Nazi website to pay a Jewish real estate agent $14 million for inciting his readers to harass her family with hundreds of threatening and anti-Semitic messages and calls.