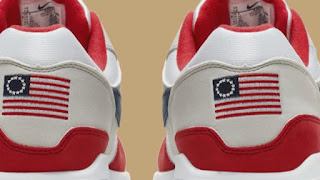 DAILYKENN.com --Colin Kaepernick appears to have convinced Nike to withdraw a line of shoes that sported the Betsy Ross flag.

The left's strategy appears to associate patriotism and nationalism with racism in an effort to demonize the nation that has enhanced the lives of over 7.5-billion humans.

The far left links colonial America to slavery. Leftist forget that white Western nations were the first to ban legal chattel slavery and that the 400,000 slaves who migrated to North America were escaping the horrors of Slavery in Africa.

Arizona Gov. Doug Ducey fought back by removing tax incentives for a NIKE opening a manufacturing facility in his state.

Colin Kaepernick’s flag protests have reportedly taken over the Nike board room.

The athletic-apparel giant began shipping out its Air Max 1 USA sneakers to go on sale this week in celebration of the July Fourth holiday, only to ask retailers to return them without explanation, the Wall Street Journal reported Monday.

The shoes had a pattern mimicking the “Betsy Ross” flag of the newly independent colonies.

“The heel of the shoe featured a U.S. flag with 13 white stars in a circle, a design created during the American Revolution and commonly referred to as the Betsy Ross flag,” the Journal wrote.

After having been teased on social media, they are no longer available on Nike’s apps and websites.