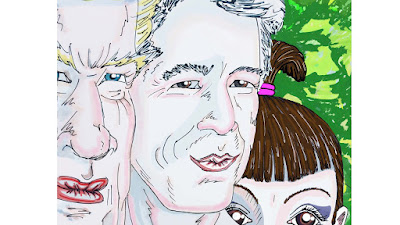 Apparently Carrey, whose art is null even for a ten-year-old, accused Trump of saying something kind about Epstein.

Jim Carrey has once again picked up the brush to criticize Donald Trump, this time painting a creepy picture of the President’s relationship with Jeffrey Epstein, the billionaire financier arrested on sex trafficking charges earlier this week.

The author turned artist’s latest work depicts Trump in the foreground, obscuring Epstein, who himself is obscuring a crying young girl.

The caption for the painting is a quote Trump, who said Tuesday that he is no longer friends with Epstein, made about the financier in a New York Magazine profile back in 2002.

“I’ve known Jeff (Epstein) for 15 years. Terrific guy. He’s a lot of fun to be with,” Trump said at the time. “It is even said that he likes beautiful women as much as I do, and many of them are on the younger side.”