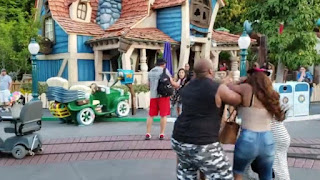 DAILYKENN.com -- Not even Disneyland is exempt from black rascality. A group of blacks were video recorded duking it out at the theme park in Annaheim, California.


Not all blacks behave this way, of course. But occassionally we need a reminder that the manner in which blacks are portrayed by Madison Avenue and Hollywood represents The Talented Tenth decribed by DuBois. The other 90 percent remain hidden by the media but can be viewed in public, for those with eyes to see.

A group of violent tourists turned Disneyland into the scrappiest place on earth.

Horrifying video captures an all-out brawl in front of kids and families at the California theme park — with one heavyset guy repeatedly punching women in the face.

“I’m ready to go to jail tonight!” screamed the main offender, dressed in a red shirt in a video going viral after being posted online Sunday.

He had appeared to start the argument with a woman pushing a stroller with two young girls in front of Goofy’s Playhouse. She was shown spitting in his face — with him taking the first swing, quickly brawling with a man who stepped in.

As children can be heard screaming in horror, the fight continues for almost five minutes, with a group of women fighting after the man in red walked off. The man in red came back — and started repeatedly smacking one of the women in the face.

At least two women were left flat-out on the ground after getting hit in different parts of the melee.

Police eventually arrived, but — not realizing how brutal the fight had been — made no arrests of the “uncooperative” group, Anaheim Police Sgt. Daron Wyatt told the Los Angeles Times.

“Now that we have the video, detectives will be following up to see if any criminal charges can be filed,” Wyatt told the paper.

Bystanders captured what is almost certainly a one-of-kind video — in all the wrongs ways — in the middle of a busy Disney property.

Reportedly having been shot at Disneyland in Anaheim, California, the video records nearly five minutes of disturbing, embarrassing behavior among at least four individuals, with one man being far and away the most aggressive.

Picking up in the middle of a heated argument, the film shows a man in red shouting and cursing in the face of a woman. The woman responds by spitting at the man, at which point he becomes violent, literally smacking the woman.

Another man appearing to accompany the woman then intervenes, resulting in the two men squaring off and beginning to trade blows.

If that weren’t enough, another woman, appearing unrelated to either side, begins to shout and finds herself attacked, eventually by each of the opposing men.

Things take a turn for the worst when the two women begin to scuffle, knocking over the man in red’s mother.