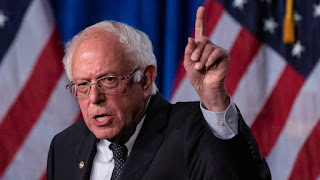 DAILYKENN.com --Bernie Sanders campaigns for a $15 minimum wage. Some members of his campaign staff earn less than that, reports say. It proves once again that leftists are the ultimate hypocrites.

Bernie Sanders’ campaign staffers claim they’re really getting berned — by not being paid the $15-an-hour minimum wage the democratic socialist advocates for all workers.

The unionized employees — known as the bottom-rung “field organizers” — say they work a minimum of 60 hours of a week, which drops their average hourly pay to less than $13, according to a new report by the Washington Post.

“Many field staffers are barely managing to survive financially, which is severely impacting our team’s productivity and morale,” union members said in a draft letter that will soon be sent to campaign manager Faiz Shakir. “Some field organizers have already left the campaign as a result.”

The staffers say their work conditions fly in the face of Sanders’ campaign platform when it comes to fair pay — he has marched with McDonald’s employees for better wages and has slammed Walmart executives for paying “starvation wages.”

The independent from Vermont has also led the fight to boost the current minimum wage, which stands at $7.25 an hour, to $15.