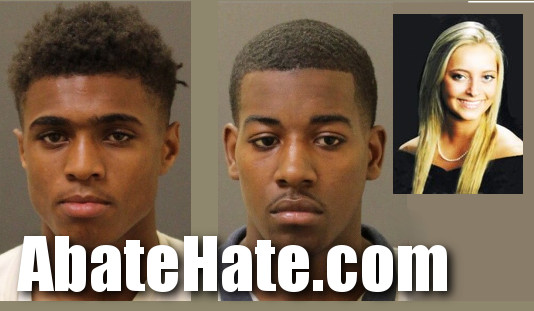 DAILYKENN.com -- Two black males were arrested after the fatal shooting of a 26-year-old blond white woman near Baltimore, Maryland. The victim has been identified as Brittany Foster.

According to baltimoresun.com, "One of two teenagers arrested this week and charged with shooting a couple to death in West Baltimore had been released on bond and facing charges of armed robbery and assault from December."

A public defender for 17-year-old Charles Anderson had sought to transfer the teen to juvenile court for the armed robbery case. Now, police say Anderson committed the double shooting, too."

The mainstream media failed to profile the suspects and victim by race. Images, however, reveal the victim is white and the suspects are black. Had the races been reversed — they seldom are — a media firestorm would have likely ensued condemning American culture as plagued by white racism.

BALTIMORE (WBFF) The deadly violence in Baltimore City is taking its toll outside the city limits as the parents of a Harford County woman prepare to bury their daughter who was gunned down in the streets of Baltimore.

"So how do you bury a child? I'm going to find out but this is hell. This is pure hell." 26-year-old Brittany Foster was one of two people who were shot to death on Bloomingdale Road on Tuesday.

Both are charged with murder tonight, but what angers Foster's family is that one of the suspects was recently released from jail on a string of other charges.

"There's a problem in the city because all these criminals are being released a week later, they're going back on the streets and they're not scared. They're not afraid. They're shooting people everyday. Why is that happening? Why?"

Both suspects are being held without bond.
*