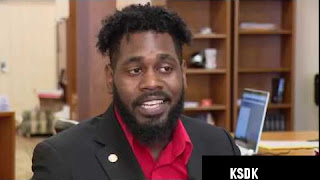 DAILYKENN.com -- A black alderman in St. Louis, Missouri says he is saddened by the level of violent crime in his district.

Ward 3 Alderman Brandon Bosley said, "This is not normal."

Bosley proposed a fix: Send in the National Guard to restore order. That fix, if it were to succeed, would be temporary. As soon as the Guard retreated, the violent crime would return.

That demands the question: Considering the pervasive reality of elevated violent crime in virtually every black neighborhood in the nation, what is a permanent fix?

Human behavior is, at its root, neurologically based and, therefore, behavior is ultimately an inherited trait. Environment can affect behavior, but only because the individual possesses on inherent disposition to react to the environment's stimuli.

What works is birthing babies parented by intelligent individuals who possess non-violent and non-criminal traits. These traits include elevated intelligence. That cannot occur until the government at all levels end mindless incentive programs that reward low-IQ black mothers to make babies. Rather, our culture should encourage intelligent, responsible blacks to create offspring to carry on their traits. Within a few generations, the violent crime problem among blacks would nearly disappear.

In the meantime, we need to bring in the National Guard.

Deadly violence in St. Louis has prompted Alderman Brandon Bosley, who serves Ward 3, to request the National Guard to come into North City and address the issue.

“The most important part is getting everyone to the table so we can have a realistic conversation about what our options are,” Bosley said. “Whether it's the National Guard, the Black Panthers or the Navy Seals … I cannot say what it is that we'll come to some sort of an agreement on."