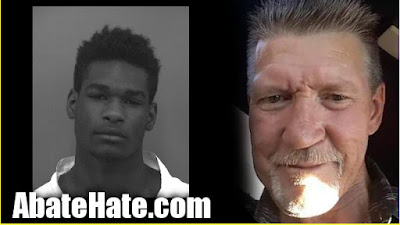 Arrested for the crime is 17-year-old Aerious Neko Rutledge. Reports describe the black teen as homeless.

The crime occurred in Northeast El Paso, Texas and was reported April 11, 2019. According to statisticalatlas.com, the city is 19.7 percent white, 7.22 percent black, and 69.9 percent Hispanic. Ninety percent of the Hispanics are identified as white.

A [black] teenager has been arrested in the fatal shooting of a 57-year-old [white] man outside a Northeast El Paso home.

Aerious Neko Rutledge, 17, was arrested at about 10:30 p.m. Wednesday in connection with the shooting of Robert Noble on Tuesday morning outside a home in the 5100 block of Raymond Telles Drive near Hondo Pass, El Paso Police Department officials said.

Rutledge was taken into custody in the 12300 block of Tierra Arena Drive in East El Paso. The Police Department’s Crime Against Persons unit, SWAT unit and Pebble Hills Regional Command officers, along with the U.S. Marshalls Office, took part in the arrest.

Rutledge is accused of fatally shooting Noble at about 1:20 a.m. outside a Northeast El Paso home, officials said.

Officers found Noble with a gunshot wound in the home’s front yard. He was taken to a hospital, where he was later pronounced dead, officials said.