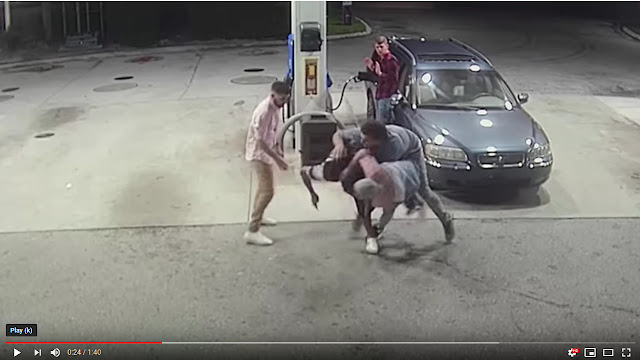 DAILYKENN.com --Four cousins from Indiana stopped for gas in Florida when they were approached by a black gunman, reports say.

One of the cousins grabbed the alleged thug's gun while another placed him in a choke hold. The attack was recorded with a security camera.

An accomplice attempted to rescue the gunman, but failed.

The crime was reported March 26, 2019. It occurred in Oakland Park, Florida.

Four cousins from Indiana stopped to get gas in South Florida when they suddenly found themselves taking action against a gunman who tried to rob them.

Alex Wisbey was pumping gas early Sunday at a Mobil gas station on Oakland Park Boulevard in Oakland Park when a gunman approached them, stuck a gun in Tanoos' ribs and demanded all their valuables.

"When I noticed the gun, you know, it was fight mode, automatically, for me," Wisbey said.

Tanoos' older brother, Jacob Tanoos, grabbed the man's gun and Wisbey put him in a chokehold as the family members took him to the ground.

The entire ordeal was captured on surveillance video.