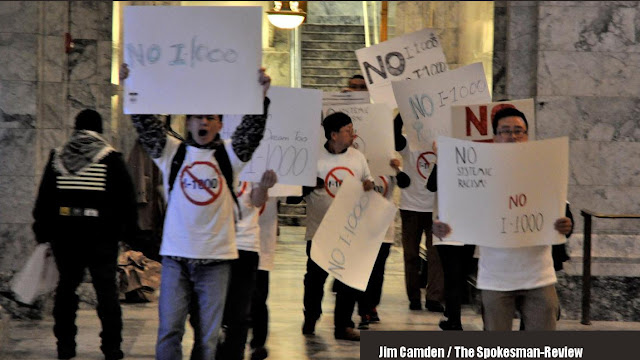 DAILYKENN.com --  The Washington legislature passed a measure that will overturn a 20-year-old, voter-approved ban on affirmative action.

The measure was passed at a late Sunday night session. By Monday morning sane citizens filed a referendum seeking a public vote on the initiative.

Initiative 1000 will allow race preferences in hiring, but supporters present it as anti-racist.

The initiative was supported by Democratic Party members of the legislature with only two exceptions. It overturns a voter-approved referendum. Oddly, Democrats champion one-man, one-vote -- such as presidential elections -- when it favors their agenda. However, when voter-direct decisions oppose their agenda, Democrats oppose them.

In a last-minute move, the Washington Legislature Sunday night passed Initiative 1000, a measure that overturns the state’s 20-year-old, voter-approved ban on affirmative action.

By Monday morning, a group opposing the initiative had already filed a referendum seeking to put the measure to a public vote.

One of those people was Kan Qiu, a 49-year-old Bellevue resident who on Monday morning filed the referendum against I-1000.

Qiu said he grew up in China, protested at Tiananmen Square during the infamous 1989 demonstrations, and later came to America for college.