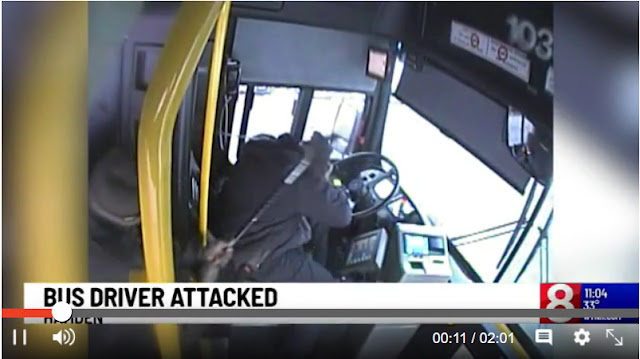 DAILYKENN.com -- A Connecticut bus driver lost his job after a video recording apparently revealed he was assaulted by a 65-year-old man.

The video shows Stefan Knox being whacked in the head with a metal cane by the suspect, reports say. Apparently 65-year-old William Horn refused to get off the bus at the last stop. Knox is seen taking his attacker down.

After the incident, however, Knox was also video recorded reengaging his attacker outside the bus, reports say. It was that second encounter that apparently led to the driver's dismissal.

The episode occurred in Hamden, Connecticut and was reported April 1, 2019. Both men are black. It underscores the reason behind Jim Crow laws that protected whites from violent blacks in some jurisdictions.

• In spite of how we see blacks portrayed in movies, television commercials, and programs, violence continues to be the norm in black communities. Not all blacks are violent criminals. However, black neighborhoods tend to be disproportionately violent.

It happened March 4th outside the Hamden bus garage.

CTtransit said the elderly passenger, William Horn, refused to get off the bus at the last stop.

Horn then allegedly whacked 19-year veteran driver Stefan Knox in the head with a metal cane.

Next, you can see Knox struggle to get free of his seat belt while punching back at his attacker.

Just as Knox bolts off the bus, the man hops in the driver seat in an apparent effort to drive the bus away.

On Monday, News 8 learned Horn, well-known to local police, was locked up for 3rd degree assault and breach of peace.

Meanwhile, the bus driver was fired after video from outside the bus shows him performing a WWE-style drop kick on the man.