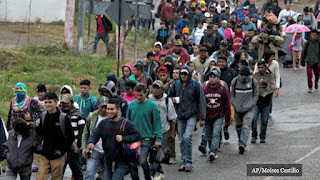 DAILYKENN.com -- 100,000 illegal aliens crossed into Texas from Mexico in March alone.The invasion prompted the state's Senate to pass a resolution effectively calling the crisis an "emergency."

Globalists appear to be using the Ghandi strategy of overwhelming authorities with sheer numbers. Martin Luther King used the same strategy, filling jails with so many dissidents that authorities could make no more arrests.

“I think that the resolution speaks to the fact that there is a crisis at the border. We have gone to a very good debate already about how we’re recognizing the humanitarian, the sex trafficking, the vulnerable populations, et cetera, and, and the reality is that when you have an unprecedented number of crossings of 100,000 in the month of March of 2019,” Senator Bettencourt said during debate on the Senate floor.