Notre Dame is the latest in a string of church arsons 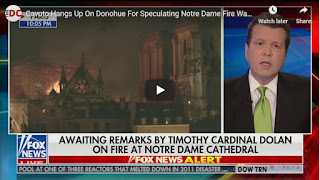 DAILYKENN.com --Neil Cavuto hung up on a Catholic League president Bill Donohue after the guest speculated the Notre Dame fire was the latest in string of attacks on churches in France.

Apparently, the only church fires worth noting are those occupied by black congregations and torched by white racist (many of which turned out to be hoaxes intended to scam insurance companies.)

The Ku Klux Klan has historically been scandalized as anti-Catholic. In reality, Islamic hate groups have a long history of attacking Catholics.

Fox News’ Neil Cavuto hung up on Catholic League president Bill Donohue on Monday when he refused to stop speculating that the catastrophic Notre Dame fire could be related to other recent attacks on Catholic churches in Paris.

“Well, Neil, if it is an accident, it’s a monumental tragedy. But forgive me for being suspicious. Just last month, a 17th-century church was set on fire in Paris. We’ve seen tabernacles knocked down, crosses have been torn down, statues, —” Donohue stated.

As Donohue mentioned, a number of churches in France have been vandalized during the early part of 2019. Vandals have smashed statues, knocked down tabernacles, burned an altar cloth, destroyed the Eucharist and smeared a cross with excrement.