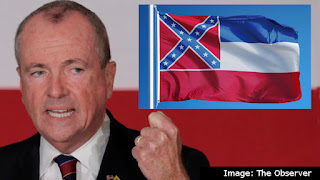 DAILYKENN.com -- Intolerance, bigotry, and hatred expressed themselves in New Jersey where the state's governor banned the Mississippi state flag.

Gov. Phil Murphy orders Mississippi flag removed from Liberty State Park due to the flag's Confederate imagery. The park is near the Statue of Liberty.

Hypocritcally, the governor justified his action by saying, “New Jersey’s strength is rooted in our diverse communities.”

Apparently that diversity does not include patriotic Southerners.

The governor's action was reportedly prompted by a request from state Sen. Sandra Cunningham.

New Jersey Gov. Phil Murphy had the Mississippi state flag removed from a park near the Statue of Liberty on Friday because it bears the Confederate battle emblem.

Mr. Murphy, a first-term Democrat, ordered that the U.S. flag replace Mississippi’s on Freedom Way in Liberty State Park where the flags of all 50 states are usually flown.

“New Jersey’s strength is rooted in our diverse communities,” Mr. Murphy said. “The Confederate symbol displayed on the Mississippi state flag is reprehensible and does not reflect our values of inclusivity and equality.”

First adopted in 1894, the Mississippi flag contained the Confederate battle emblem in its upper-left corner alongside horizontal blue, white and red stripes. It was repealed as the state flag in 1906, but the lack of a replacement has left it in de facto use for more than a century.

Mr. Murphy credited the decision to state Sen. Sandra Cunningham, a Democrat representing Jersey City where the park is located across from Ellis Island.

“The Confederate flag symbolizes an era of hate, violence and division,” Ms. Cunningham said. “I thank Governor Murphy for his commitment to tolerance and equality and for the decision to remove this hateful symbol from Liberty State Park. Hate has no home in New Jersey.”