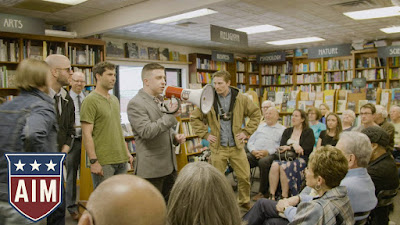 DAILYKENN.com -- A group of white nationalists interupted a presentation at a Washington, DC, bookstore. The group was comprised of about a dozen young white men and one young woman. 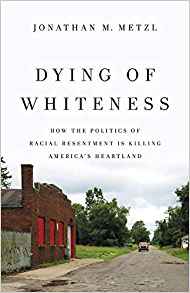 The book, Dying of Whiteness: How the Politics of Racial Resentment Is Killing America's Heartland, appears to blame white racism for the demise of America's heartland.

A group of self-described nationalists interrupted an event Saturday at a Washington D.C. bookstore with an author of a book titled  "Dying of Whiteness: How the Politics of Racial Resentment Is Killing America's Heartland." The group can be seen in videos posted to social media chanting "this land is our land."

The popular bookstore, Politics and Prose, was hosting an event on Independent Bookstore day with author Jonathan Metzl, who is also a professor of sociology and psychiatry at Vanderbilt University. The group of about a dozen protesters used a bullhorn to interrupt Metzl while he was speaking.

"You would have the white working class trade their homeland for handouts," a protester said. "But we, as nationalists, and identitarians, can offer the workers of this country, a homeland, our birthright, in addition to health care, good jobs and so forth."

Identitarism is a far-right group that originated in Europe as Identity Evropa, according to the Southern Poverty Law Center. The group left chanting "AIM," which appeared to be a reference to the American Identity Movement, the rebranded name of Identity Evropa.

Attendees booed the protesters and Metzl said as they walked out "let's take a minute here ... what just happened?"

Graham told WUSA-9 the store had no warning about the interruption.
*