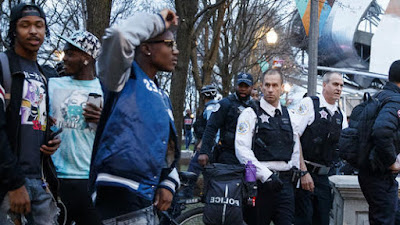 The juveniles are assumed to be black. (The term "teen" is seldom used by the media. The word has become synonymous with "black." The media prefers "juvenile.")

• A Pittsburgh, Pennsylvania area carnival was forced to close due to fights among "teens." A headline read, "Brawl At Delaware County Carnival From ‘Out-Of-Town Troublemakers’ Puts Permanent End To Event, Officials Say".

“You heard a bunch of cops screaming, ‘Get out, everybody get out’. There was at least 30 cops running. It was scary, it was scary. It was to the point where I was looking for my older daughter, telling her to call because I’m pushing her out of the way, because it was that scary,” said Rose Murphy, of Collingdale.


• Two black females were arrested after video of a housing project brawl in Danville, Illinois were posted on social media.

• In Charleston, West Virginia, a large fight involving as many as 100 broke out on the stage at a rap concert. According to wsaza.com, "Charleston Police say a crowd of 50 to 100 people fought on stage during a rap concert Saturday night leading to reported shots fired. The fight happened after rapper Sada Baby performed at the Charleston Coliseum and Convention Center."

More than 30 teenagers were arrested in downtown Chicago when fights broke out Wednesday night as hundreds of students and about 200 officers wound through bustling streets.

The large groups of young people, many of them high school students, moved through the Loop and the Near North Side, according to Chief of Patrol Fred Waller, speaking at the corner of State and Lake streets after 9 p.m. Wednesday.

“The challenge is to keep the public safety,” he said.

A total of 31 people, 23 males and eight females — all juveniles, ages 15 to 17 — were taken into custody, most of them charged with disorderly conduct, a misdemeanor, and released to their parents, police said Thursday. Other charges included disorderly mob action, resisting arrest and battery, according to a police statement.

Waller said there probably were about 500 teens traveling through the city. Just after 9 p.m. Wednesday, police lined the middle of State Street outside the Chicago Theatre. More than a dozen officers on bikes surrounded a group of teens and blared their sirens. About 15 minutes later, a large of teens group bolted back to the corner of State and Lake streets as two women posed for a photo in front of the Chicago Theatre marquee.


“When they run like that, someone starts a fight,” Waller said.