Home » »Unlabelled » Chocolate cake is racist, but only if...

Chocolate cake is racist, but only if... 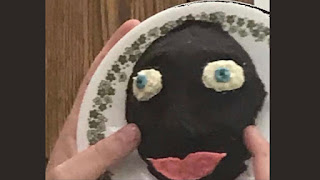 DAILYKENN.com -- A crisis is raging at Cleveland High School in Portland, Oregon after white girls made a chocolate cake. The cake was offensive because it included eyes and a mouth giving it a "black-face" appearance.

The eyes, however, were blue. Non-white people almost universally have brown eyes. Blue eyes are a white trait.

It appears that someone is attempting to convince black people to interpret virtually everything as racist while perceiving themselves as victims.

What's next? We expect the students who made the cake will be race-shamed until the capitulate and offer an apology.

A high school in Portland, Ore., is responding to parents and students after a series of racist incidents took place on campus last week.

On Thursday, Cleveland High School Principal Ayesha Freeman sent out an email to inform parents and students of an offensive cake that had been made in a culinary arts class that resembled blackface.

The chocolate cake appeared to have exaggerated red lips and blue eyes in the photo tweeted out by high school senior Brody Kreiter.

Principal Freeman referred to the discovery of the cake as “an event … that was hurtful to our staff and students of color” in the email, which was shared with Fox News. "We are working together towards a restorative process to heal our community from the hurt and harm that has been caused by a series of incidents this year," it continued.

The cake, which sparked backlash online after Kreiter posted the picture, was baked four days after Principal Freeman had to send out an email to parents alerting them that a teacher had found a nooselike string hanging from an entranceway on campus, Oregon Live reported.