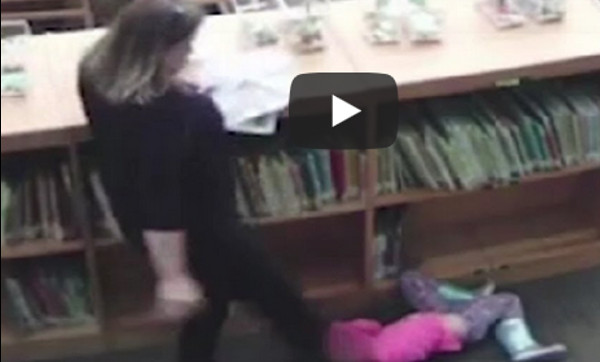 DAILYKENN.com -- A teacher was fired after a security camera video recorded her kicking a five-year-old student, reports say.

If we must have government schools, then we must have accountability. That translates into video cameras recording students from the moment they climb aboard the school bus until they are returned to their homes. A more suitable solution to the epidemic of children being abused by staff and other students would be the privatization of schools with support for home schools.

A Kansas elementary teacher was caught on video kicking a 5-year-old girl — and could face criminal charges over the disturbing incident, according to reports.

First-year teacher Crystal Smith was fired a month after whacking the kindergartner at Bluejacket-Flint Elementary School in Shawnee after finding the girl hiding in a library bookshelf, according to the Kansas City Star.

Smith is seen on camera yanking the girl from the shelf and walking away, leaving the child lying on the floor. She then returns and kicks the girl in the back — out of sight of another teacher in the room.

School officials found the surveillance footage after the girl’s mom complained the day of the Feb. 21 incident.

The mom discovered red marks on her daughter’s arm.

“I don’t like my teacher. She’s really mean. She hit me on my arm,” the girl told her mom, according to KCTV.

Smith was placed on leave and “was never again in contact with students and was terminated as soon as the investigation was complete,” school district spokesman David Smith told the Star. She was fired March 25.

Arizona teacher arrested for having sex with 13-year-old student, once ...

Arizona teacher arrested for allegedly having sex with 13-year-old ...

Brittany Zamora had sex with student while another watched, police say

https://www.wthr.com/.../louisville-teacher-arrested-giving-minors-drugs-alcohol-new-y...
▶
Jan 3, 2019
LOUISVILLE, Ky. (WAVE) — A Kentucky teacher is behind bars for allegedly allowing minors to drink and smoke ...

▶ 0:18
Oct 3, 2018
A teacher at Franklin Community High School was suspended from the school after he was arrested on ...

▶ 0:50
Nov 3, 2018
Students at the Maywood Academy High School in California say their teacher and classmate engaged in a ...

▶ 1:10
Mar 15, 2019
A case that initially started with the arrest of her ex-boyfriend landed a kindergarten teacher behind bars on ...
Stay up to date on results for teacher arrested.