Blackish male kills white woman, then himself, at outlets mall 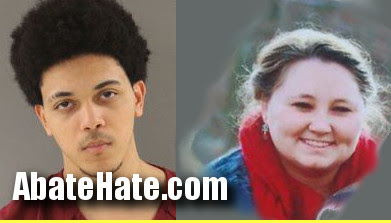 DAILYKENN.com -- Olivia Cunningham is dead. The 24-year-old white woman was fatally shot by a blackish teen who apparently committed suicide at the crime scene.

The crime occurred at an outlets mall near Pigeon Forge, Tennessee and was reported April 18, 2019.

Authorities believe the shooting was random.

Police said an East Tennessee man opened fire outside a store at the Tanger Outlet Mall on Tuesday, killing a 24-year-old woman from Pennsylvania and wounding a 75-year-old man from Massachusetts before turning the gun on himself.

The gunman was identified as 21-year-old Leon Steven Jones Jr.

Police believe the three people involved did not know each other.

"It appears that this was a random shooting," Sevierville Police Department spokesman Bob Stahlke told reporters at a news conference Tuesday evening.

Police believe Jones confronted Cunningham and Marr outside the Coach store, shot both with a semi-automatic handgun and then shot himself with the same weapon, a .32 caliber Kel-Tec pistol.