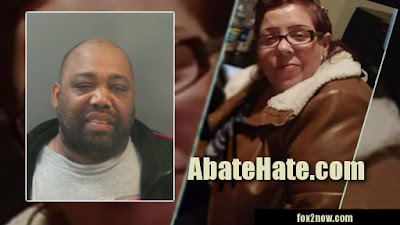 DAILYKENN.com -- Marcia Johnson is dead. The 54-year-old white woman was beaten to death in her St. Louis, Missouri home. Arrested for the crime is her black husband.

Samuel Lee Scott, 54, is innocent until proven guilty in a court of law.

Scott was apparently arrested previously for beating his wife, then released on $5,000 bail. She was beaten to death hours after her black husband was released, reports say.

• To our knowledge no "feminist" organization has denounced the physical abused and murder of Johnson. This is apparently due to the fact that the suspect is black and the victim is white. Were the races reversed, the media would likely be abuzz with sordid tales of white supremacy.

A woman is dead after she was beaten in her apartment.  The man accused of killing Marcia Johnson, 54, was able to bond out of jail just before the beating.  Now, Samuel Lee Scott, 54, has been charged with murder.

Marcia was found with a severe head injury on the night of April 9th inside a south city apartment on Wisconsin Avenue that she shared with her husband, Samuel Lee Scott.  A family member found Marcia. She was rushed to the hospital, but police say she died five days later from her injuries.

Scott was arrested and charged on April 5th with misdemeanor domestic assault for allegedly hitting Marcia on “the right side of her face with his fist” in January. The documents say he, “admitted having struck her.”

The court documents show Scott had been charged with misdemeanor assault for an attack in January.  They also reveal that he was able to bond out of jail on April 9th with the help of a group called “The Bail Project.” That is a national organization with an office in downtown St. Louis. Their website says, “We pay bail for people in need, reuniting families and restoring the presumption of innocence.” His bail was $5,000, cash only.