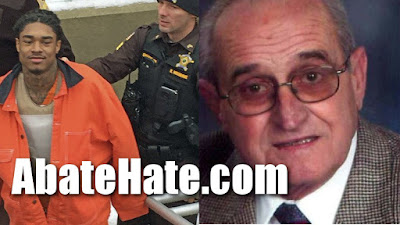 DAILYKENN.com -- John Clements is dead. The 82-year-old white man was murdered outside his home in the suburban Indianapolis town of Zionsville, Indiana. Reports say the attack was random.

Convicted for the crime is Damoine Wilcoxson. Wilcoxson is now 23-years-old. He will spend the rest of his life in a gated community where he will enjoy the benefits of free food, housing, health care, education, and affinity with fellow black conviction.

• When you see a black male stranger roaming through your neighborhood, call police. Forget the black comedians who ridicule whites for their "racist" phobias. Reality is that young black males who comprise about four percent of the nation's population commit about half of the nation's homicides. Your call to the police may save a life and the comedian will never know it was you who called.

A 23-year-old convicted killer will spend the rest of his life behind bars.

Damoine Wilcoxson was sentenced to a total of 102 years in prison after being convicted of a series of violent crimes, including a murder in Zionsville in 2016.

In handing down the maximum possible sentence, the Boone County judge said Wilcoxson is prone to hate and violence.

The 23-year-old showed absolutely no remorse before or after learning his fate, nor did he offer any apologies to the family of the man he been convicted of killing, John Clements.

In September 2016, the 82-year-old man was murdered outside his Zionsville home. Clements was targeted at random as he went to get the mail.

“My goodness to walk up your driveway in broad daylight and have someone do this to you is beyond comprehension,” said Boone County deputy prosecutor T.K. Morris.

When police tried to arrest Wilcoxson, he allegedly fired several shots at officers.

Forensic testing on shell casings confirmed that the same gun was used in all four locations—Clements’ shooting in Zionsville, the two IMPD headquarters locations and the area where Wilcoxson was arrested.

Wilcoxson has already been sentenced to 37 years for the shootings in Marion County. The 65 year sentence in Boone County will run consecutive and brings the total punishment to 102 years.