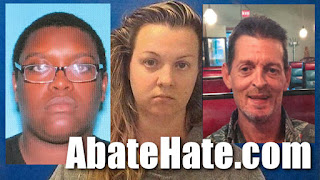 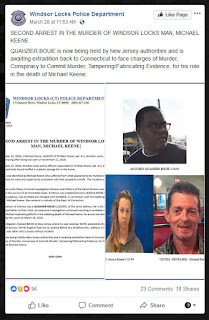 The victim's body was discovered November 27, 2018, reports say. His white daughter and black boyfriend were arrested in March, 2019.

The crime occurred in Connecticut, reports say, proving there is no safe space for white people; even in regions with overwhelming white majorities. There are, however, virtually no black-on-white crimes in Iceland where the population has historically been homogenously white until the recent Islamic invasion.

State troopers arrested 24-year-old Quazhier Bouie on March 27 at a Stratford Avenue home in Neptune with help from police from his hometown of Windsor Locks, Connecticut, and the U.S. Marshals Service, police said.

In November, "Bouie and his girlfriend allegedly fatally stabbed her father and attempted to conceal his body," according to a statement from New Jersey State Police.

In a separate prepared statement, Windsor Locks police said Bouie and 24-year-old Jessica Keene, who was already in custody, are believed to have killed Keene's father, 51-year-old Michael Keene, who was last seen Nov. 11 and had been reported missing Nov. 22.

On Nov. 27, police found Michael Keene dead in the apartment where he, Jessica Keene and Bouie all lived.

Michael Keene's body was "stuffed in a plastic storage bin" with "multiple stab wounds about his neck and upper torso consistent with that caused by a knife," according to the statement from Windsor Locks police.