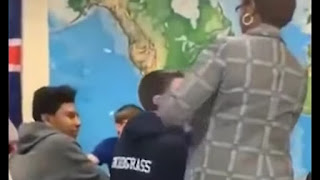 DAILYKENN.com --The next time some leftist moonbat accuses you of intolerance or preaches a sermon about white racism, think of the humiliation suffered by this white student:

A video making the rounds on social media appears to show a school official in York County wrapping a 'Donald Trump 2020' flag around a student's neck.

In the video, which has been shared thousands of times on Facebook, a student can be seen wearing a Trump 2020 flag that reads 'Make America Great Again.' A woman -- who the school district referred to as a 'para-educator' -- walks by and appears to slowly wrap the flag around the student's neck. Other classmates could be heard laughing in the background.

The account where the video was posted, titled 'Uncle Sam's Misguided Children,' said the video was taken inside Tabb High School in Yorktown.

Area residents told 8News affiliate WVEC they believe the administrator should be fired.

"I don't care what it is, I think that particular action is out of hand," Todd Hodges said.

Merrill Williams added, "It's the wrong thing to be teaching kids."

In a statement, York County school officials said they are investigating the incident as a personnel matter:


The York County School Division is aware of the video being circulated on social media depicting an interaction between a para-educator and a student. We take this matter seriously, as we do all concerns brought to our attention.

The York County School Division believes every student is entitled to a safe and welcoming school environment. School Board policy also recognizes that school time and school property should not be used for any political purposes. Employees are expected to refrain from engaging in any activity supporting or opposing a candidate or political party while on duty, while on school property during school hours, or while representing the school division.

As such, we would like to assure our community that school and division administrators are continuing to review this personnel matter in accordance with division policies and procedures.