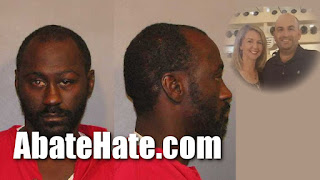 DAILYKENN.com --  Heather and Kelly Jose were a middle-aged white couple. Their bodies were found in their burned out car; unrecognizable.

Reports say Watkins persuaded the couple to give him a ride  from a shopping mall. Without an independent witness it is not known if the couple was forced to allow Watkins in their car or if they were simply acting like naive white people.

Watkins, who is black, has an extensive arrest record.

What you need to know:

Television Negros are usually portrayed to be dark white people with a moral compass who are oppressed by empathy-lacking white people. Real black people commit violent crime at a much higher rate than whites and East Asians. They are more likely to act on impulse.

How to avoid the fate of Heather and Kelly Jose

2 - Acknowledge that: Not all black Americans are criminals and not all criminals are black.

4 - Refuse to be bullied with accusations of 'prejudice' and 'stereotyping.'

5 - Be mindful that leftists who lecture us about white racism nearly always live in white neighborhoods.

6 - Reward sane and civil blacks with your genuine friendship and encouragement.

7 - Never allow your children to ride a school bus with black children.

8 - Never allow your children to attend a predominantly black school.

9 - Question all American history that cast whites in the perennial role of oppressors and blacks their victims.

The man accused in the slayings of a couple who gave him a ride from a Shreveport mall in an apparently random crime has a lengthy criminal record that includes multiple arrests for domestic violence as well as arrests for drug possession, burglary and indecent behavior with a child.

Dewayne Willie Watkins, 34, of Shreveport, is jailed under $1 million bond in connection with the deaths of Kelly Jose, 43, and his wife, Heather, 33, of Shreveport. Their bodies were found last Thursday in a burning car parked at a house on Penick Street in Shreveport's Queensborough neighborhood. Police believe the couple was leaving Mall St. Vincent when a man approached them. They wound up giving him a ride, police said.

Watkins was arrested over the weekend at a house two blocks away from where the couple was found dead. Members of Watkins' family said he lived there with his girlfriend. He was apprehended after a nearly six-hour standoff that ended when the suspect went out a window and tried to run. A police K-9 subdued him.

Watkins, who is jailed on suspicion of second-degree murder, is scheduled to make his initial court appearance on Tuesday to get a lawyer.

Court records show Watkins was last in jail in March of this year, when he was arrested after serving just over two years of a three-year sentence for sexual misconduct with a child. Caddo sheriff's deputies had arrested him in February 2016 for indecent behavior with a 10-year-old girl. He pleaded guilty to two counts of obscenity this past February and was released from jail in March. The three-year sentence was the result of a plea agreement between prosecutors and the defense attorney.