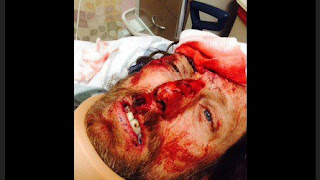 Blacks attacking white people for sport has been epidemic in the United States for generations and was probably the seminal impetus for Jim Crow laws.

Tragically, white Americans have been lured into confusing reality with Hollywood myths, causing them to assume black no-go zones are populated with commercial Negros like those featured in television ads, programming, and cinema.

In reality black neighborhoods are rife with violence. All too often the red pill awakening is administered by a brutal beating.

Not all blacks are criminals and not all criminals are black. However, FBI statistics reveal that blacks represent a disproportion number of crime relative to the rest of our nation's population. Data reveals that in 2015 32.1 percent of those arrested for aggravated assault were black. 26.6 percent of arrests overall were black. Blacks constitute about 13 percent of the population.

Wadlington says he was attacked on Madison while riding his bike to do an errand near his Midtown home. He doesn't remember much.

"I was just riding along. And the next thing I know, there are bystanders over me waking me up off the sidewalk in a pool of blood," he said. "One bystander said, 'A guy got out of the car and hit you with a bat.'"

The attack left him with serious injuries to his entire face, including a broken nose, cheekbone and tooth.

He says he never saw the person who did it.

"It's keeping me from looking for work. I've had to turn down at least one job because I'm not supposed to bend over," Wadlington said.

Jones says he was walking home from a friend's house on Cowden when his attack happened.

"I instinctively took off running and going, 'Whoa! Whoa!' At the same time, he hit me atop my head," he said. "Some young guy got out of the car with a baseball bat or something."

Jones says he was able to run away and a neighbor helped him call police.

“It was a cut that required two staples," he said of his head injury.

In both cases, the attackers did not steal anything.