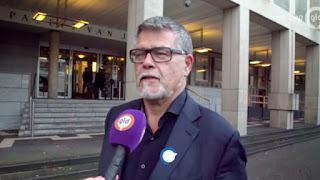 DAILYKENN.com --Emile Ratelband, 69, filed a lawsuit against the Dutch government. He identifies as a 49-year-old and wants the age on his passport legally changed. The change, he says, will allow him to go back to work and meet more women on Tinder.

Is he serious? Probably not.

Cultural Marxism deplores individual differences because they defy the insanity of the far-left's dogma that we are essentially all the same.

Natural human differences account for disparities in wealth. Smart people tend to earn more than dumb people. Marxism, however, contends that wealth disparities are due to an oppressive bourgeoisie class that clings to wealth by oppressing the proletariat.

The Marxism dogma defies reality and results in cognitive dissonance in which reality conflicts with dogma. Believers in the Marxist cult (there are countless millions) attempt to remove the dissonance.

The Marxism solution is to deny reality and replace it with the absurd notion that natural human differences — such as race and gender — are social constructs. Were that true, then age difference is also a social construct; the point being apparently made by Emile Ratelband.

A 69-year-old entrepreneur in the Netherlands wants to legally change his age to 49 so he can go back to work and meet more women on Tinder, according to his lawsuit.

Emile Ratelband filed a lawsuit against the Dutch government in an attempt to change the birth date on his passport from March 11, 1949, to March 11, 1969, the Dutch publication De Telegraaf reported.

The self-proclaimed positivity guru argued that he feels 20 years younger, and compared the age difference to being transgender, despite the concepts being completely different.