Home » »Unlabelled » Malema to black Africans: Before we crush the white system, let's build our own

Malema to black Africans: Before we crush the white system, let's build our own 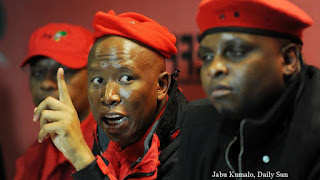 DAILYKENN.com --Julius Malema is one of South Africa's most visable and vocal politicians. He is widely considered to be a Marxist with rhetoric vehemently attacking his nation's white minority.


Malema addressed a convention of black professionals. He advised them that blacks should build their own system prior to crushing the white system.

From this we learn that:

• Malema intends to crush "the white system." No one seems to know what constitutes a "white system." If may be referring to South Africa's social, legal, and economic infrastructure and its multitude of adjuncts such as eduction.

South Africa is the most advanced nation in sub-Saharan (black) Africa due the collective intellect and innovation of its white population.

• There is no first-world black nation on earth (outside Hollywood's studios). If Malema expects to create a sustainable first world black nation, it will be a one-of-a-kind and the first of its kind. In other words, it won't happen because it can't happen.

• If Malema can be taken at his word and black leaders comply, the white infrastructure is safe.

• Malema's concept of a black system is likely a communist state akin to Cuba, Venezuala, and North Korea. It is doubtful that he has a desire to develop a productive first-world free market, democratic republic. If that be the case, the white population in South Africa is in grave danger and can expect the fate of whites in Rhodesia and Idi Amin's Uganda.

For a glimpse into the future of whites in South Africa, google the search term "South Africa farm murders" then click on 'images.'

"The white man hates the idea of equality", EFF leader Julius Malema told a gathering of black professionals in Sandton on Friday.

"They hate the EFF, not because we have guns, but because we speak the language of equality and they hate that. They view us as sub-human and they will not live among sub-humans.

"When you empower sub-humans that is a threat to white supremacy, they will disappear," he said to a rousing applause.

The political party convened a black professionals meeting to confer on what form and shape legislation should take in government ahead of the 2019 elections.

The party's deputy chairperson Floyd Shivambu and chairperson Dali Mpofu were also in attendance. They sat and listened as the professionals from different sectors of the economy aired their views.

"A working-class white man and a working-class black man do not speak the same language, and that is because at the centre of every division in South Africa is race. As long as we have not resolved the race question, you can forget about that.

"I will pull the race card every time, I am not even ashamed of that. That is why we called a meeting of black professionals," Malema said at the Sandton Convention Centre on Friday.