Germany to roll out mass holding centers for "asylum seekers'

DAILYKENN.com -- Theguardian.com reports Germany's government plans to "roll out mass holding centres for asylum seekers" across the country. The article is accompanied by a propaganda video in which Islamic invaders are portrayed as adorable people to be embraced.

The video — in which one adorable "migrant" complains that Germans sneeze too loud — masks the coarse reality that the hordes of Islamic insurgents bring crime and violence with a net loss to Germany's culture, identity, and economy.

The video and article dodge critical issues including Islam's rape culture, the low average IQ of Islamic insurgents (often ranging from 70 to 85), the welfare dependency that is charged to taxpayers, the no-go zones, the high crime rates, or the fact that terrorism seems to be endemic to Islamic societies. (776 people of color were killed by Islamic hate groups in October, 2018. Another 771 were killed by Islamic hate groups in September.)

The article gives the impression that Chancellor Angela Merkel's anchor center program is a get-tough altnerative to screen out unworthy asylum seekers. In reality the program will likely broaden the scope of the Islamic invasion making it more efficient.

Other nations, such as Hungary, Poland, and Croatia, have demonstrated that the "refugee crisis" can be resolved by simply denying Islamic insurgents entry into their countries. 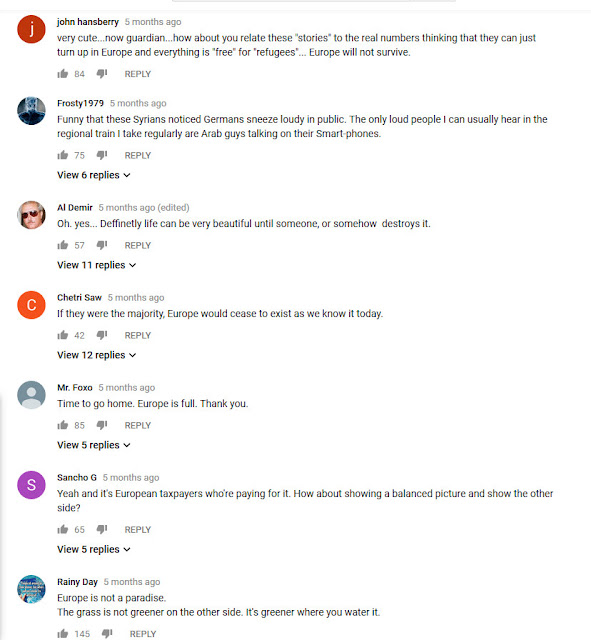 Mass holding centres that Germany’s interior ministry wants to roll out across the country will stoke social tension between locals and migrants and undermine the welcoming image the country has gained in the eyes of the world, aid organisations have said.

So-called anchor centres – an acronym for arrival, decision, return – are designed to speed up deportations of unsuccessful asylum seekers, by containing large groups of people and the authorities who rule on their claims inside the same holding facility.

Until now, Germany’s policy has been to embed new arrivals in communities across the country. But Angela Merkel’s government is seeking to reverse its strategy, as a populist backlash builds against the chancellor’s handling of the refugee crisis.