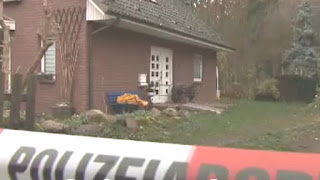 DAILYKENN.com -- Had he survived the knife attack, 85-year-old Dietrich would have been culturally enriched. Tragically he died after his throat was slashed by his 20-year-old caregiver.

Reports say the Afghan's asylum application had been rejected. Apparently the unnamed suspect prefers life in a plush German prison to the dystopian Afghanistan.

A German news organization reported there was no apparent theft but was careful to note there was also no known religious or political motive.

A rejected asylum seeker (20) killed the pensioner Dietrich P. (85) on the night of Saturday: He cut his throat, probably in his sleep, police and prosecutors told Sunday afternoon With.

An arrest warrant for insidious murder has now been issued against the Afghans, who were arrested on Saturday.

Particularly perfidious: perpetrators and victims knew each other, the Afghan was in August 2018 even a week with the care of the old man entrusted. Lastly, the young man should perform auxiliary work in the victim's home.

After the incident, which occurred on Saturday morning at 2 o'clock in the morning, the Afghan had fled. He was picked up by the highway police at the A24 near Geesthacht (Schleswig-Holstein) in the afternoon, as Steffen Baudler from the Rostock Police Headquarters said. The officials first took the young man to a hospital. When checking the identity, it turned out that he was the suspect. He is now in custody in Neustrelitz.

The man previously lived in a refugee shelter in the Zwickau area (Saxony), his asylum application had been rejected. But he had a toleration status of the Saxon authorities until the end of January 2019.

The daughter of the victim, who is active in the refugee aid there, had given the 20-year-old the job of caring for her father.

According to police, the suspect in Mecklenburg-Western Pomerania is not on record. Whether this is so in other states, must still be determined.

The deed was discovered by a household helper who lived in the pensioner's house. He had seen the attack early in the morning via a camera in a baby monitor. However, he had initially assumed that the 20-year-old had the old man the ceiling addressed, said Claudia Lange, spokeswoman for the prosecutor Schwerin.

What drove the young Afghans to action is currently completely unclear. The murder knife has not yet been found, the man himself has not yet commented on the act.

There are currently no indications of religious or political motives, nothing was stolen.
*