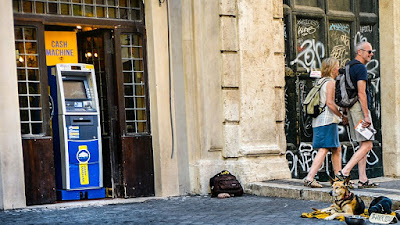 It appears the gang's modus operandi is to use explosives to open ATM machines, then scamper off in Audis.

An October 18, 2018 report in pi-news.net claims the mob struck near Munich where they targeted an ATM at a bank. Police gave chase after gas was ignited in an attempt to demolish the ATM. The getaway driver survived a gunshot from police, but rammed his way through a blockade only to be later captured.

Arrested are two teens and a 49-year-old.

North Africans pose as refugees and asylum seekers to gain access to Europe. Once there they engage in crime and molest women while living on government handouts. They also vote for far-left politicians who enable their entry into Europeans nations and are, in my opinion, complicit to their illegal activities.

According to internal information, most of them are North Africans who live in the Netherlands and travel unhindered to Germany to blow up ATMs. Banks in North Rhine-Westphalia have been hit particularly hard for years. There, the circa 400-member band, which often drives with stolen PS-strong vehicles of the Audi brand to their nocturnal explosive actions, was given the name "Audi-Bande". You should belong to more than 200 members mostly Moroccan origin. But also banks in Bavaria were affected: two times the Deutsche Bank in Ottobrunn, a Commerzbank branch in Schwabing and a Deutsche Bank branch in Grünwald in April.

The police had apparently been targeting the internationally active gang for some time. Marcus da Gloria Martins of the Munich police spoke in this context of "professionals from the Champions League". The perpetrators would usually accept dead and seriously injured. Her nickname has around 250 heads strong gang of fast, high-powered cars she uses for her actions. Stolen cars with stolen license plates, as in the Germering case. The gang members come from the Netherlands, where the series started several years ago. As the financial institutions there increasingly upgraded to technically protect their machines from attack, and the actions for the perpetrators were thus more risky and expensive, the gangsters shifted their activities in neighboring countries.
*