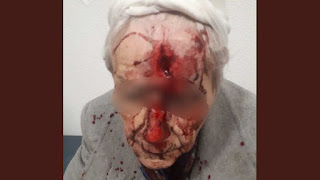 DAILYKENN.com -- An elderly Dutch woman was culturally enriched as she walked home alone after a card game with friends. The enrichment occurred in Eindhoven in the Netherlands.

Reports say the woman was knocked to the pavement and repeatedly kicked in what appears to be an attempted robbery.

The Netherlands had a long history of low crime rates until globalist-Marxists opened the borders to hordes of Islamic slugs from northern Africa and other regions, ostensibly as refugees fleeing war and violence.

The life of an 85-year-old woman from Eindhoven was completely turned upside down on Saturday night. She was injured in a failed street robbery on Cassandraplein in her home town. The investigation has started an extensive investigation to get the perpetrator of this cowardly action as quickly as possible.

The woman came back from her card club at 7 pm when she suddenly and with great force was overpowered by an unknown man at the Cassandraplein. The woman had no chance and was badly injured because the perpetrator kicked several times. Her assailant then put it on a run and left the woman behind on the road surface. He did not take anything. The victim screamed and called for help. Just after the robbery a woman came along with her daughter. They offered first aid to the heavily bleeding woman, who was then transferred directly to the hospital.

The detective takes the case high: "It is terrible what happened to this woman The sense of security is an innocent woman taken away by this cowardly action We do everything to track down the perpetrator and call on everyone to get information with to share us ", says the criminal investigation department in Eindhoven. Immediately after the incident, a neighborhood survey was carried out and the technical investigation department also made sure that traces were safe. In the environment it is examined whether camera images have been made on which something can be seen, for example from the perpetrator. Of the man only a brief description is known. It would be someone with a white hood.

The woman was pretty upset after her fall. She was confused and startled by what had happened to her. She has been treated in the hospital and has to take it easy. To underline the seriousness of this matter, we bring a photo of the woman out in consultation with the victim and her family. It is easy to see how seriously the woman was being injured. The photo is placed at the bottom of this message. At a later moment, the criminal investigation department is going to talk to her. Because we have to talk extensively with the woman, it is not entirely clear what time the attempted robbery took place. The police were called around 7 pm, but it seems that the perpetrator struck between 6.30 and 7.00 pm.