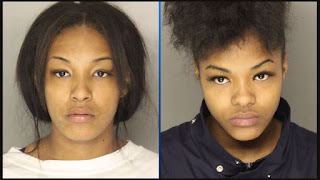 DAILYKENN.com -- Sisters Dalaysha Pryor and Delaya Knuckles were arrested after allegedly using a pink stun gun to commit a robbery. The stun gun was found in one of the female's pants.

The alleged crime was committed near a woman's hospital in Pittsburgh.

The robbery took a bizarre turn when the suspects pulled out a stun gun.

The victim told police she was walking on the street in front of the hospital when she noticed two young females playing with a stun gun.

She said they lunged at her with the stun gun. At that time, she panicked and handed over her purse. The victim ran toward Panera to call 911 and the girls reportedly ran the other way.

Police later found both suspects, Dalaysha Pryor and Delaya Knuckles, in the neighborhood. They also found out their sisters. The one was walking down the street and had all of the victim’s belongings in her bag. Police found the other suspect hiding behind a home nearby.

When officers confronted them, they said they had no recollection of the robbery, but the one did voluntarily say she had a pink stun gun down her pants.

Both women are now charged with a long list of offenses including, robbery, simple assault, possession of a weapon and giving a false ID to law enforcement.

The victim is okay and helped officers identify the two suspects.