What to do when a dirty old white man touches you 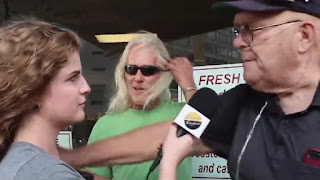 DAILYKENN.com --When an old white man reached out and touched her, she firmly but politely asked him not to touch her.

He responded by saying it was his right. Then, according to the report, said he could throw her on the ground and rape her.

The oldster was protesting against Trump at a rally in Pennsylvania. His victim was conservative reporter Kaitlin Bennett.

A group of fake feminists came to the old white man's defense prompting Kaitlin to post on social media, “Feminists around him, who say we’re supposed to believe women, defended him and denied it happened. This is what the left has come to. #MetToo”

Last night at the Trump rally in PA, a liberal protester touched me against my consent and said he'd throw me on the ground and rape me. Feminists around him, who say we're supposed to believe women, defended him and denied it happened. This is what the left has come to. #MeToo pic.twitter.com/E6R9c0LA9J
— Kaitlin Bennett (@KaitMarieox) October 11, 2018


*The 'What Would You Do' guy from ABC could create a similar scenario and incorporate it into his who. That, however, won't likely occur.