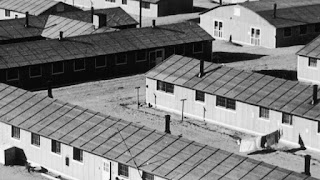 DAILYKENN.com -- Apparently American troops are being sent to the border with Mexico to facilitate Central American "migrants".

Donald Trump is planning to build tent cities to accommodate the invaders, process their asylum claims, and deport them. Somehow the image of thousands of invaders trekking southward after their asylum claims have been rejected fails to materialize.

Expect the far left to compare the tent cities to detention centers constructed during WW2 to accommodate Japanese and Hitler era internment camps.

Trump says in an interview with Fox News host Laura Ingraham that if any of the migrants, who are still hundreds of miles away, do make it to the border and apply for asylum, as they’re legally entitled, the U.S. plans to “hold them until such time as their trial takes place.”

Under current protocol, migrants who clear an initial screening are often released until their cases are decided in immigration court, which can take several years.
*