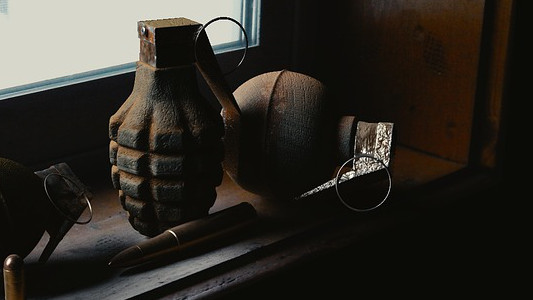 DAILYKENN.com -- Now, who in peace-loving, leftist Sweden would care to harbor hordes of hand grenades and other explosives?

Between today and early next year, anyone in possession of hand grenades or illegal pyrotechnical equipment can hand them over to police without risking punishment.

Sweden's first-ever amnesty period for illegal explosives got under way on Monday and is set to last until January 11th 2019. The hope is that criminals will choose to give up some of the hand grenades that are in circulation and get the weapons off the country's streets.

The move was proposed by the centre-left coalition government last year, with Justice Minister Morgan Johansson telling DN: "This is linked to criminal gangs who in general have increased access to weapons which they use against one another and against the judicial system. We must get these off our streets."

According to police figures, 43 hand grenades were seized in Sweden last year, of which 21 had been detonated. In 2016, 55 were seized, of which 35 had detonated.

Both years were a notable increase on the amount of grenades detonated in 2015, when the number was ten (though the amount seized that year, 45, was consistent with 2017).

During the amnesty period, anyone in possession of explosive goods without a licence can hand them over to police without fear of punishment. It is possible to stay anonymous. Such goods include for example hand grenades, but also explosives in general, detonators or other pyrotechnical goods such as illicit fireworks.

Unlike during Sweden's weapons amnesty earlier this year, it is not permitted to bring unwanted explosives to police stations. People are instead urged to call 114 14, the non-emergency police contact number, to report the weapons.

Around 12,000 illegal firearms were handed over to police between February 1st and April 30th during that amnesty period. However most were old hunting rifles and only a few could be linked to the criminal world.