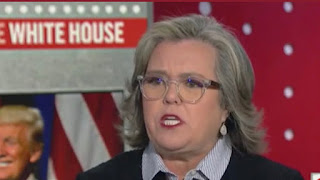 DAILYKENN.com -- Never fret when leftist moonbats are in a lather of rage. It's an indicator that they are frustrated by continually losing the culture wars. It's akin to a small child throwing a temper tantrum.


Rosie O’Donnell said on MSNBC Thursday that she wants to send the U.S. military to the White House to “get” President Donald Trump.

O’Donnell made the comments while appearing in a wild segment of Nicolle Wallace’s MSNBC show called “Deadline: White House.” O’Donnell was describing how she was depressed for a year after Trump was elected when she proposed a coup of the presidency.

“What I wrote on Twitter was we should impose martial law until we make sure the Russians weren’t involved in the final tally of the votes. … And people were like, ‘Martial law? What’s wrong with you?'” Rosie opined.