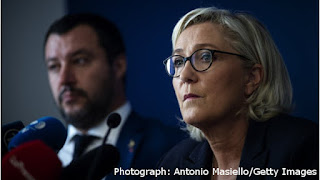 DAILYKENN.com --The silly notion that the demographic destiny of Western Europe is a done deal is being challenged by patriots who promise to storm the Brussels bunker in future elections.

France's far-right leader Marine Le Pen joined Italy’s firebrand Interior Minister Matteo Salvini in Rome on Monday to launch their campaign for European parliamentary elections with an attack on the "Brussels bunker" they plan to storm.

Speaking with Le Pen by his side, Salvini said the May vote to elect members of the European Parliament would signal a “common sense revolution” across the continent.

The head of Italy's anti-immigrant League party has taken a hardline anti-immigrant stance since coming to power in June and has recently shifted the focus to social issues, including Italy's low birth-rate.

His party won 17 percent of votes in March, and opinion polls suggest it would win as much as 30 percent should the country head to the polls again.