Home » »Unlabelled » Cristóbal Colón: The most hated Jew since Jesus (by the far left)

Cristóbal Colón: The most hated Jew since Jesus (by the far left) 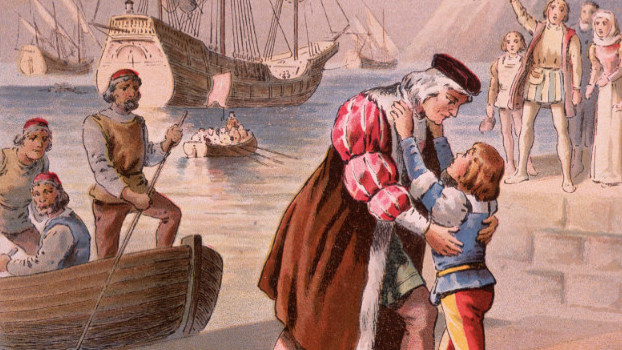 DAILYKENN.com --The far left hates Cristóbal Colón almost as much as it hates Jesus Christ. Maybe more so.


Colón, known colloquially as Christopher Columbus, was an Italian who, historians say, didn't speak Italian. He was, in fact, a Jew whose focus was on the liberation of Jerusalem from Islamic slugs but found himself hampered by Catholic inquisitors who seemed to hate Jews as much as Linda Sarsour.

Fortunately, Colón was a smart man who played the system well and found himself slushing ashore in The New World in 1492. That was one step for man. One giant step for mankind.

But is the Jewish story really true?


In Simon Weisenthal's book, "Sails of Hope," he argues that Columbus' voyage was motivated by a desire to find a safe haven for the Jews in light of their expulsion from Spain. Likewise, Carol Delaney, a cultural anthropologist at Stanford University, concludes that Columbus was a deeply religious man whose purpose was to sail to Asia to obtain gold in order to finance a crusade to take back Jerusalem and rebuild the Jews' holy Temple.

In Columbus' day, Jews widely believed that Jerusalem had to be liberated and the Temple rebuilt for the Messiah to come.

Scholars point to the date on which Columbus set sail as further evidence of his true motives. He was originally going to sail on August 2, 1492, a day that happened to coincide with the Jewish holiday of Tisha B'Av, marking the destruction of the First and Second Holy Temples of Jerusalem. Columbus postponed this original sail date by one day to avoid embarking on the holiday, which would have been considered by Jews to be an unlucky day to set sail. (Coincidentally or significantly, the day he set forth was the very day that Jews were, by law, given the choice of converting, leaving Spain, or being killed.)

Columbus' voyage was not, as is commonly believed, funded by the deep pockets of Queen Isabella, but rather by two Jewish Conversos and another prominent Jew. Louis de Santangel and Gabriel Sanchez advanced an interest free loan of 17,000 ducats from their own pockets to help pay for the voyage, as did Don Isaac Abrabanel, rabbi and Jewish statesman.