Boots on the border? Trump threatens to send military to stop alien caravan 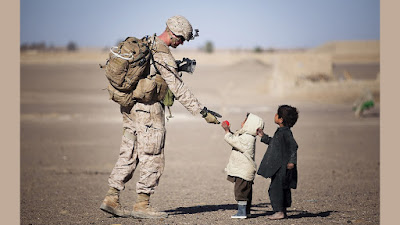 DAILYKENN.com -- The problem with illegal aliens flooding across the Mexican border transcends generations.

President Herbert Hoover rounded up about 1-million Mexicans and sent them back to Mexico. That was nearly 100 years ago.

Decades later President Dwight Eisenhower reportedly rounded up another 1.3-million Mexicans and sent them back across the Rio Grande in 1955.

Far-left historians recall the events as blights on American history and frame them as intolerant and racist.

But the perpetual tides of Mexicans crashing the border compels us to ask:

2 - Why don't they follow the legal path to citizenship?

3 - Why can't they develop their own nations?

2 - Some do follow the path to citizenship. Others prefer to invade our nation and work for tax-free cash.

3 - They don't develop their own nations because, in the aggregate, they do not possess the innate aptitude to develop cultural, social, economic infrastructures as advanced as Western societies.

The fact they keep coming here en masse testifies to the above.

And so they come. And they continue coming. And they will never stop trying.

Who can blame them? Would you not do the same?

From latimes.com ▼ By KATE LINTHICUM and JEFF ABBOTT

President Trump threatened Thursday to scrap a crucial trade deal and send troops to the U.S. southern border in response to a large caravan of Central American immigrants heading toward the United States.

In a series of tweets, Trump said that if Mexico is incapable of stopping the immigrants, he will “call up the U.S. Military and CLOSE OUR SOUTHERN BORDER!”

Trump also threatened to cancel a pending trade deal with Mexico that took more than a year to negotiate and is designed to replace the North American Free Trade Agreement.

“The assault on our country at our Southern Border, including the Criminal elements and DRUGS pouring in, is far more important to me, as President, than Trade or the USMCA,” Trump said, referring to the United States-Mexico-Canada Agreement.

His threats came as an estimated 1,500 members of the loosely organized caravan reached the Mexico-Guatemala border, with thousands more expected to arrive in the coming days. Mexican authorities have closed a border crossing near the town of Tapachula, and have ordered hundreds of federal forces to the area to help immigration agents guard popular illegal crossing points along the murky Suchiate River, which forms the international boundary between the two countries.

Dozens of federal police officers stood guard on the Mexican side of the river on Thursday. It was unclear whether the immigrants would try to rush the border, as they did at the Honduras-Guatemala border several days ago, or whether they plan to turn themselves in to border authorities with the hope that they will be granted entry. The immigrants appeared ready to wait for the rest of the caravan to arrive in order to proceed together.

Mexican authorities have said that members of the caravan will be treated like anybody else seeking to enter Mexican territory: Those with proper documentation will be allowed to pass while anybody entering the country “in an irregular manner” will be apprehended and returned to their home country.