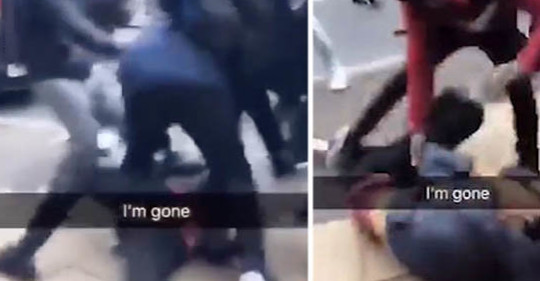 DAILYKENN.com -- Shocking video shows what appears to be a black mob pummeling a white victim after he was stabbed and thrown to the pavement. An iconic double-decker bus is seen in the background highlighting the radical charge multiculturalism has levied on Western Europe.

Two others were reported stabbed.

White Europeans who express dismay at their 35,000-year-old culture being displaced by asylum-seeking immigrants from low-intellect third world regions risk being jailed on hate-speech charges.

You may watch the video here ...

SICKENING footage has emerged showing a violent fight erupting outside a Birmingham McDonald's which left three people with knife injuries.

The video shows one man being thrown to the ground after he had been stabbed, in the incident yesterday.

A girl behind the camera begs the attackers not to “touch him”, before pulling a hooded man’s arm screaming and adding: “You better not f***ing touch him.”

But her pleas fall on deaf ears as a mob continues to kick and punch their target.

One of the gang appears to be brandishing a machete as he strikes the victim.