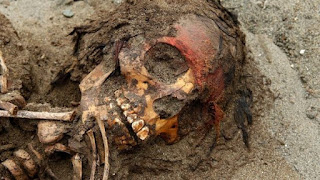 DAILYKENN.com -- [Updated 2018-04-29 8:04 am] The skeletal remains of 140 children were unearthed by archaeologists in Peru. The children were massacred in an apparent sacrificial ritual about 550 years ago or a few decades before Christopher discovered The New World.

The victims were part of the Chimú Empire that was displaced by the savage Inca Empire a few decades later.

The site provides empirical evidence of the base savagery that permeated America's pre-Columbian cultures prior to the arrival of Western culture.

The arrival of Europeans upended millennia of native savagery in the Americas, saved thousands from horrendous massacres, and ultimately provided healthcare technology that saved the lives of countless millions of non-white natives.

Still, the savagery continues into the 21st century as natives engage is drug-related turf wars dominating much of Central and South America. An estimated 250,000 El Salvadorian refugees fled to the safe haven of the United States to escape such savagery. El Salvador continues to be a no-go nation for tourists.

Of the twenty most savage nations on earth, 18 are are Central America, South America, Caribbean, and Polynesia. The other two are in Africa. [source]

The number represents homicides per 100,000 residents.

All but two of the twenty least savage nations are in Europe and Asia.


All people groups have a history of violence.

Another gruesome site has been uncovered at a fifth-century fort on the Baltic island of Öland, Sweden. The remains of 26 persons, including children and an elderly man, were found. [source]

The massacre in Sweden differed from that in Peru. The Swedish massacre was an apparent attack while the atrocity in Peru was a ritual sacrifice.

Another difference is that the Swedish massacre appears to be a rare anomaly while the mass sacrifice in Peru appears to be a common normality. This is reflected in today's homicide rates among the descendants of the respective people groups and suggests an innate, genetic cause.


The site was first brought to the attention by excavators in 2011, when locals discovered eroded human remains in the area. At that time, the remains of only 42 children and 76 llamas were found.

By 2016, the remains of 140 children and 200 young llamas had been discovered at the site. Radiocarbon dating pinpointed the date of the supposed sacrifice between 1400 and 1450.

The condition of the remains suggests the children had incurred cuts to the sternum and rib dislocations for the removal of their hearts.