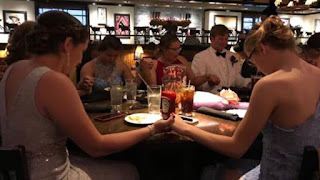 DAILYKENN.com -- A displacement reality has gripped our culture.

The group had gathered at a steak house for dinner prior to attending a prom and were photographed holding hands while praying.

“My guess is their opinions on gay marriage, interracial families, equal rights, and other things we hold dear might not thrill you,” one wrote.

The seething hate behind the toxic posts could be the stark reality that so many teens could survive 12 years of government school indoctrinated and still retain their identity.

A debate is raging in the comments of a Facebook post that shows several teenagers saying grace at a local Longhorn Steakhouse before their prom.

Frank Somerville, a journalist at KTVU in Oakland, Calif., had been sent the photo by one of the teens’ mothers, according to his Facebook post. He shared the photo with his followers Tuesday, along with a note from the young woman’s mother.

“I want to share a picture of my daughter and her friends from prom night,” a woman Somerville identified as “Noelle Smith” was quoted as saying. “Now with the stories today about teenagers and tide pods and condoms gathering headlines — this picture speaks for itself.”


The woman also added that she was “so impressed” with the group. “They all said Grace before eating and were all well behaved.”

The picture, however, soon sparked a debate among commenters, who began to argue over whether the photo depicted a group of “nice kids” solely because they were pictured praying.

“Saying grace over your food says nothing of your moral compass, integrity or character … Behaving well at a restaurant while in your late teens, and being considerate to people, should not be Facebook praise worthy,” said one commenter who took issue with the pic.

“My guess is their opinions on gay marriage, interracial families, equal rights, and other things we hold dear might not thrill you,” wrote another poster.