Hogg out. Kashuv in. Parkland survivor Kashuv displaces Hogg as the real hero 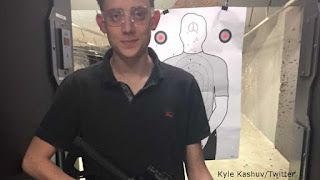 DAILYKENN.com -- When a frustrated gov't school teacher reportedly demonized the student as Hitler, it became apparent the teen was on the right track.

Kyle Kashuv is the young constitutionalist who survived two assaults: The Parkland shooting and the subsequent media attack on the Second Amendment.

Kashuv visiting a shooting range with his father. That prompted authorities to launch an investigation; the same authorities who did little prior to mass shooting that claimed seventeen lives.

A police report of Kashuv's investigation was made public. The poorly written report transcends the issue at hand and underscores the need for government schools to focus on fundamentals rather than social indoctrination.

The text of the police report is below.

On April 23, 2018 I was approached by the school security supervisor Mr. Greenleaf regarding a student that posted a video on social media of himself shooting a riffle [sic]. There were students concerned about the video.

The student was Kyle Kashuv w/m [birth date]. He was asked about the video and he stated the riffle [sic] was a friend of his. He stated he went shooting with his dad and he took a video and posted it on social media. He said he didn’t threaten anyone.

Kyle [sic] mother [name redacted] was contacted and she said she knew about the video and she confirmed Kyle [sic] statement about going with his dad to the gun range. She stated he’s a good kid and wouldn’t hurt anyone.

The video was taken down prior to the meeting.


The report itself is incorrect. Kashuv did not remove the video of himself at the gun range. Kashuv told The Daily Wire:

This police report shows how incompetent the Cowards of Broward are and how unjustified this interrogation was. They can't spell "rifle" properly, calling it a "riffle" TWICE, they used my dad's name for my mom, they practically admit they hadn't bothered to read the Tweet, yet they had no problem using vicious interrogation tactics on a minor. This is why I went to the range because I need to learn how to protect myself because my area's law enforcement is systematically incompetent. Honestly, their attempt to silence me in this incident was an epic fail and actually did the polar opposite, so I wanted to thank the Cowards of Broward for strengthening my love for 2A.