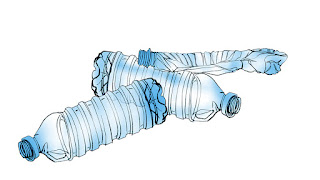 DAILYKENN.com -- The problem with white people: They keep inventing life-enhancing innovations that positively affect everyone; derailing the cultural Marxist narrative that whites are inherently evil.

Case in point: Prof John McGeehan, at the University of Portsmouth, UK, led research that produced an enzyme that eats plastic. Besides being white, McGeehan's team is alleviating a key component of pollution.

Shift the credit to non-whites.


Take, for example, the amazing discovery of the DNA chemical structure by James Watson and Francis Crick. The left is attempting to shift the credit to a Jewish woman, Rosalind Franklin who, with Maurice Williams, participated in the precursory research that led to the breakthrough discovery of Watson and Crick.


Scientists have created a mutant enzyme that breaks down plastic drinks bottles – by accident. The breakthrough could help solve the global plastic pollution crisis by enabling for the first time the full recycling of bottles.

The new research was spurred by the discovery in 2016 of the first bacterium that had naturally evolved to eat plastic, at a waste dump in Japan. Scientists have now revealed the detailed structure of the crucial enzyme produced by the bug.

The international team then tweaked the enzyme to see how it had evolved, but tests showed they had inadvertently made the molecule even better at breaking down the PET (polyethylene terephthalate) plastic used for soft drink bottles. “What actually turned out was we improved the enzyme, which was a bit of a shock,” said Prof John McGeehan, at the University of Portsmouth, UK, who led the research. “It’s great and a real finding.”

The mutant enzyme takes a few days to start breaking down the plastic – far faster than the centuries it takes in the oceans. But the researchers are optimistic this can be speeded up even further and become a viable large-scale process.

“What we are hoping to do is use this enzyme to turn this plastic back into its original components, so we can literally recycle it back to plastic,” said McGeehan. “It means we won’t need to dig up any more oil and, fundamentally, it should reduce the amount of plastic in the environment.”

About 1m plastic bottles are sold each minute around the globe and, with just 14% recycled, many end up in the oceans where they have polluted even the remotest parts, harming marine life and potentially people who eat seafood. “It is incredibly resistant to degradation. Some of those images are horrific,” said McGeehan. “It is one of these wonder materials that has been made a little bit too well.”