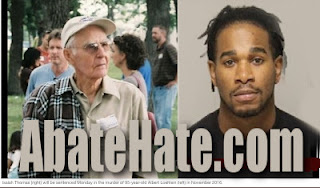 DAILYKENN.com -- Imagine the media firestorm were the races reversed.

They almost never are reversed.

Is this why we had segregated neighborhoods?

Albert Loehlein made wine from grapes grown in his backyard in Anoka, logged his own trees for the fireplace and made rugs with his mother’s loom set up in the basement.

At 95, he could barely see or hear, but wished to live independently in the home he bought in 1945. It was there that he and his wife, Hannah, raised six children. Loehlein cared for Hannah there as she succumbed to cancer several years ago.

“He didn’t want to be anywhere else,” his son, Timothy Loehlein, said in Anoka County District Court on Monday. “He loved being there.”

Isaiah M. Thomas lived six blocks away. Over Thanksgiving weekend in 2016, Thomas crept into the WWII veteran’s home, beat him to death with a flashlight and a clock that he pawned for $22.50. On Monday, he was sentenced to life in prison, with a chance of parole after 30 years.

Loehlein’s children urged the court to lock Thomas away for life. Thomas and his attorney, Caroline Durham, argued that prejudice had unfairly burdened Thomas his whole life. Thomas is black. Loehlein was white.

“I apologize in all honesty and sincerity,” Thomas said before launching into a five-minute speech about poverty and discrimination.

Isaiah Thomas and his attorney Caroline Durham stand as the judge reads his sentence.

Thomas said Monday that his behavior was not coldblooded, but rather an act of “warm-blooded, long, deep misplaced anger” directed toward a man who represented other men who had victimized him and his peers.

“I’m a product of my environment,” said Thomas, who was shackled while in court.

In handing down the sentence, District Judge Barry Sullivan reflected on the crime’s effect on the community.

“If a nice old guy like Albert Loehlein isn’t safe in his own home, who is?” he said.

Loehlein lived in his home in the 1200 block of 5th Avenue S. alone with help from family members, who said they honored his wishes after his wife died.