Home » »Unlabelled » White man shot pointblank in the back of the head; four blacks arrested

White man shot pointblank in the back of the head; four blacks arrested 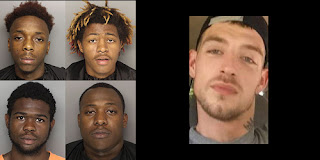 DAILYKENN.com -- Apparently four black males pretended to have an interest in buying a set of speaker from 25-year-old Christopher Shane.

In reality it appears they intended to rob the unsuspecting white victim.

News reports said four shot were fired at Shane. One — fired from point-blank range at his head — appears to be the bullet that ended his life.

The crime occurred in Greenville, South Carolina and was reported August 19, 2016.

Evans said Satterfield sustained multiple gunshot wounds. An autopsy will be performed to determine an exact cause of death.

Detectives from the Violent Crimes Unit were called in to investigate.

According to deputies, Satterfield was involved in an altercation with 22-year-old Shamar Raekwon Sullivan and 24-year-old Shake Javonte Curry. Deputies said Sullivan and Curry chased Satterfield in a vehicle behind two separate suspects in another car, 18-year-old Desmond Jackson and 20-year-old Elijah Williams.

While being pursued, Satterfield reportedly crashed his vehicle near the intersection of Rutherford Road  and Locust Street at which time Jackson and Williams fled the scene.

Deputies said Sullivan and Curry confronted the victim as the crash seen during which time Curry pulled out a handgun and shot Satterfield at least once, killing him.

Jackson and Williams are charged with accessory after the fact and were taken into custody. Both were denied bond in court on Thursday.

At the hearing the victim's parents, Greg and Angela Satterfield, said Christopher was a hardworking and loving person.

"He's a great guy, my right hand man," said Greg Satterfield. "He would do anything he could for you."

Angela Satterfield described her son as "kind-hearted, he would give you the shirt of his back."

The couple said the suspects met Christopher to buy a set of speakers but robbed him and shot him, pointblank in the back of the head.

"Took four shots at him and left him lying there dead over a set of speakers they obviously couldn't afford," Greg Satterfield said.


Farmers routed from Zimbabwe; then this happens . . .

Permission is granted to use the material in this article providing (1) the byline is included in an obvious manner crediting DailyKenn.com as the author, (2) a link to this page is included and (3) no changes are made either by deletion, addition or annotation. Original compositions at DailyKenn.com are sometimes seeded with decoy data, such as hidden acronyms, to detect unauthorized use and plagiarism.
Comments at DailyKenn.com are unmoderated. Comments containing obscenities, pejoratives, slurs, etc., do not constitute an endorsement of this site, its contributors or its advertisors. Offensive comments may be deleted without notice.
Comment ▼
at 5:08 PM