Vermont mayor secretly arranges for Islamic colonization of his town 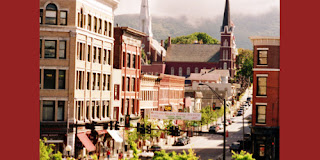 DAILYKENN.com -- The Census Bureau says 16,495 residents live in Rutland, Vermont. It also claims that 95.9% of the residents are White and 0.8% are black.

That's too white for globalists.

It appears the town's mayor unilaterally and secretively arranged for an influx of Islamic colonists to take up residency there.

Globlists worldwide are assuring the destruction of Western culture by injecting hordes of non-white, low-intellect insurgents into every white nation and neighborhood.

Those who oppose the displacement are stigmatized, demonized, and stereotyped as Klanish racists, then shamed into shushing. We have somehow been convinced that preserving our culture for our progeny is evil.

The problem being: When patriots are silent, only evil people are speaking.

The citizens of Rutland had no vote in the matter.


Members of the Board of Aldermen say they haven’t seen the city’s refugee resettlement application despite a claim by the mayor that the document’s availability proves he’s being transparent on the issue.

In a recent radio interview, Mayor Chris Louras attempted to silence critics of his plan to make Rutland a refugee resettlement community by saying the city’s application to the federal government is available to the public.

“The abstract was, in fact, given to the Board of Aldermen, and they do absolutely have the latitude to provide that abstract to any constituency,” Louras said on Vermont Public Radio’s Vermont Edition.

Two aldermen told Watchdog the board has never seen it.

“He certainly didn’t present it to us,” Alderman Ed Larson said in an interview. Permission is granted to use the material in this article providing (1) the byline is included in an obvious manner crediting DailyKenn.com as the author, (2) a link to this page is included and (3) no changes are made either by deletion, addition or annotation. Original compositions at DailyKenn.com are sometimes seeded with decoy data, such as hidden acronyms, to detect unauthorized use and plagiarism.
Comments at DailyKenn.com are unmoderated. Comments containing obscenities, pejoratives, slurs, etc., do not constitute an endorsement of this site, its contributors or its advertisors. Offensive comments may be deleted without notice.
Comment ▼
at 5:30 AM