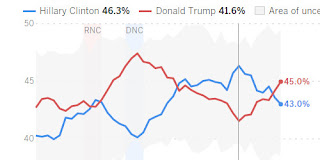 DAILYKENN.com -- Donald Trump's steady decline in presidential polls reversed in mid-August and now at least one poll shows he has regained the lead over Hillary Clinton.

54.3% said they expect Clinton will win the presidential election. 39.9% expect Trump to win.


The USC Dornsife/Los Angeles Times "Daybreak" poll tracks about 3,000 eligible voters until election day, asking on a regular basis about their support for Hillary Clinton, Donald Trump or other candidates as well as their likelihood of actually casting a ballot.


We update the data each day based on the weighted average of poll responses over the previous week. That means results have less volatility than some other polls, but also means the poll lags somewhat in responding to major events in the campaign.

Permission is granted to use the material in this article providing (1) the byline is included in an obvious manner crediting DailyKenn.com as the author, (2) a link to this page is included and (3) no changes are made either by deletion, addition or annotation. Original compositions at DailyKenn.com are sometimes seeded with decoy data, such as hidden acronyms, to detect unauthorized use and plagiarism.
Comments at DailyKenn.com are unmoderated. Comments containing obscenities, pejoratives, slurs, etc., do not constitute an endorsement of this site, its contributors or its advertisors. Offensive comments may be deleted without notice.
Comment ▼
at 7:01 AM