DAILYKENN.com -- A recent Reuters poll reveals that Hillary has lost her lead over Donald Trump.

An August 22 poll showed Trump trailing Hillary by 12 points. A week later that gap had evaporated. Hillary was polling 39.7 percent while Trump was at 39.1 percent. 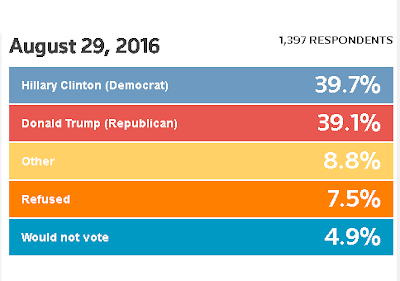 Permission is granted to use the material in this article providing (1) the byline is included in an obvious manner crediting DailyKenn.com as the author, (2) a link to this page is included and (3) no changes are made either by deletion, addition or annotation. Original compositions at DailyKenn.com are sometimes seeded with decoy data, such as hidden acronyms, to detect unauthorized use and plagiarism.
Comments at DailyKenn.com are unmoderated. Comments containing obscenities, pejoratives, slurs, etc., do not constitute an endorsement of this site, its contributors or its advertisors. Offensive comments may be deleted without notice.
Comment ▼
at 7:09 AM